Posted at 22:57h in projects by studio 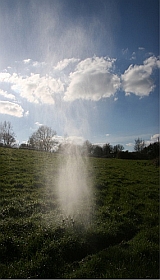 In May Juliet Haysom was awarded the 2007 Jerwood Sculpture Prize for her proposal, Spring.

Researching her proposal for the Jerwood Sculpture Prize brief, Juliet realized that Ragley Hall is situated above one of England’s most significant aquifers. About 40 percent of Severn and Trent Water’s supply comes from this vast subterranean water resource, as do the celebrated springs at nearby Malvern, Leamington Spa and Burton on Trent. Rather than construct something large and solid out of stone or metal, she will drill a borehole into the aquifer below Ragley Hall park in order to create an ephemeral sculptural form made of water vapour. Spring’s form and appearance will vary depending on weather and light conditions, but the reliable water source means that it will remain a permanent feature of the park. As well as having a formal relationship with the nearby sculptures, Spring will have a direct and active relationship with the landscape itself. Using the actual water present in the ground, visible vapour will sustain the turf and surrounding plants before vanishing into the atmosphere and ultimately returning to the ground. While at first glance Spring might look like a natural phenomenon, on close inspection the form of its jets and the presence of nearby solar panels will reveal the fact that it is a man-made intervention into the landscape. The parkland at Ragley Hall is similarly deceptive; its rolling hills, stands of trees and picturesque lake were, in fact, designed by Capability Brown.

Spring will be installed at the Jerwood Sculpture Park at Ragley Hall, Warwickshire, in spring 2008.